It has been a little over a month since I came off the trail. I was pretty beat up both physically and mentally and I've taken the last month off to heal. I'm feeling much better now and ready to redirect my energies.
I am working on finding new outlets to help those veterans who continue to struggle with PTSD. I have some ideas percolating. I will keep you posted.
Meanwhile, my family and I are going to take some of my mother-in-law's cremains and summit Springer Mountain, Georgia. This was part of the original plan. Thanks for your continued support.
I hope everyone had a great 4th of July! 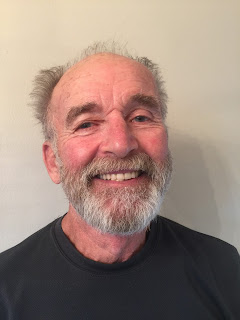 Off Trail - Still On Mission - posted by WOW

I have decided to take myself off the Appalachian Trail and not continue my hike. If you have been following my journey you know that I injured my hip early in the hike and sought medical advice. Eventually my doctor told me that it would be all right to continue. I got back on the Trail and the pain returned. I decided to grit my teeth and push on hoping, perhaps irrationally, that the pain would diminish. I did not tell anyone about this pain. Some days were worse than others. Prescription NSAID's (anti-inflammatory medications) became a daily part of my diet. And after almost a month of this I have decided that enough is enough and I don't want to cripple myself for life.

In the time I was out there I covered almost 300 miles through five states. I met some amazing people, saw some amazing scenery and had some amazing adventures. I do not regret having done it; my only regret is that my 69-year-old body would not allow me to continue.

I know I was successful in my mission to increase awareness of veterans struggling with PTSD. I spoke with countless people I met on the Trail including numerous veterans. I passed out cards and in return received e-mails with thanks and blessings for what I was doing as well as donations. I was afforded the opportunity twice to speak to large gatherings about PTSD and the response from these events was truly touching.

One of the biggest gifts from my time on the Trail is an increased awareness of the fact that everything happens for a reason or as a woman I met on the Trail put it “Humans plan and God laughs.” So I am off the Trail but still on the mission. Now I must figure out a new way to continue to spread the word about this terrible disease that afflicts over one million veterans. I have some ideas percolating but I am going to take a little while for my body to heal.

God bless our veterans
Posted by Unknown at 7:25:00 PM No comments:

I thought we were done with rocks! - posted by WOW Wifey/captions by WOW

WOW is in New York, near Greenwood Lake. He wasn't expecting this (again!) Funny how he said in his whole year of research it was not mentioned anywhere how very rocky the Appalachian Trail is in so many spots. This is not how I visualized the Trail.
Note the blaze at the bottom! 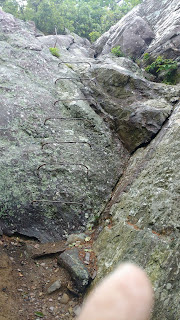 At least they give you a ladder
to get over these rocks! 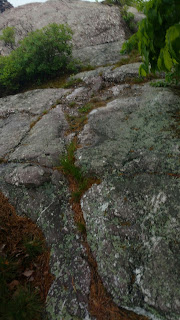 Can you find a foothold here? 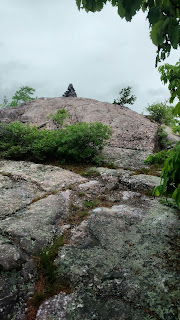 That pile of rocks at the top is called a cairn.
Some helpful person put it there so
you know where the trail goes. 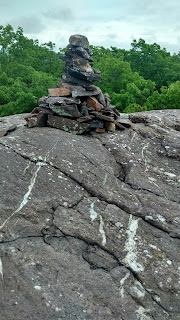 The cairn up close! 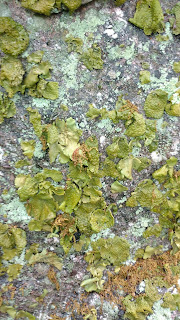 Colorful growth on the rocks!

WOW made it into the state of New York for Memorial Day! 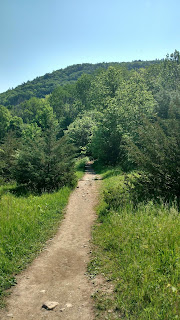 Somewhere on top of that mountain
is where I'm headed! 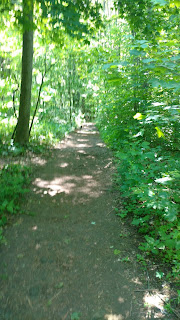 Thank goodness for the shade!
It's 90 degrees outside! 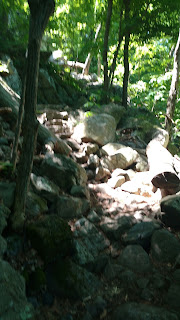 Thought I was through with these rocks 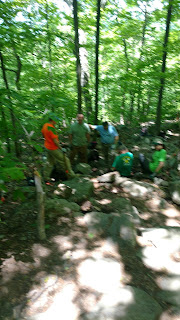 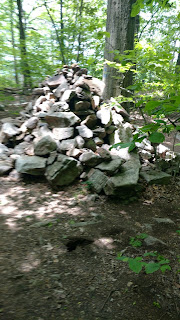 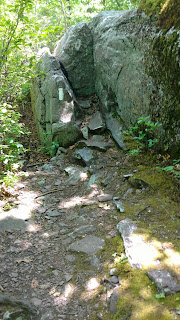 This is not hiking - this is rock climbing! 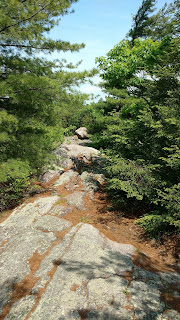 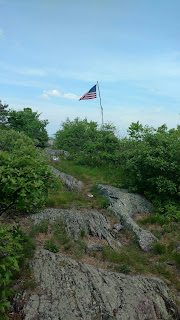 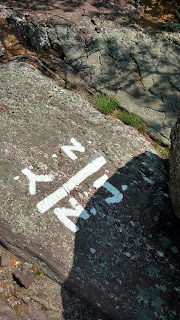 I am now in New York 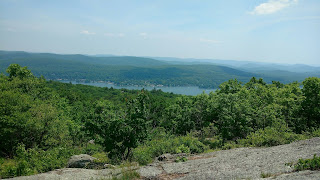 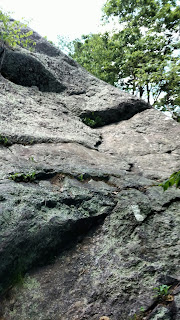 This is ridiculous - straight up and over!

It was a rough day. I had the steepest longest climb I have had yet on the trail. My pack was as heavy as it has ever been since I had food left over from last resupply and there were more rocks. The trail was so steep that when I stopped to catch my breath I had to face up hill and lean forward or I was afraid my pack would tip me over backwards. Memorial Day weekend brought out lots of day hikers. The trail was clogged. It was hot and humid 90 degrees but fortunately the trees have grown in and they provided some shade on the trail. Lots of Arnicare tonight.
Posted by Unknown at 7:17:00 PM No comments:

Things do happen for a reason! WOW went into High Point State park looking for information about getting to a chiropractor in a nearby town. The superintendent of the park told him about this event, introduced him to the guy in charge. He invited Mike to speak! Afterwards, he was interviewed by a reporter from the local paper and there was a story in it about him today! New Jersey Herald article 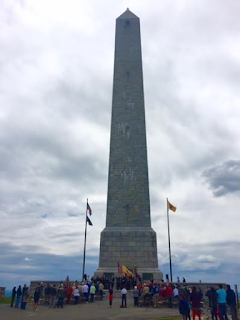 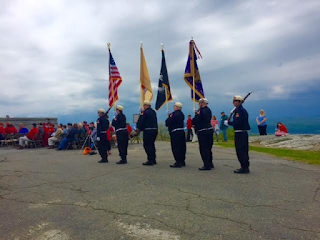 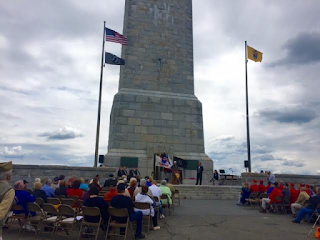 Zoom in to see WOW speaking 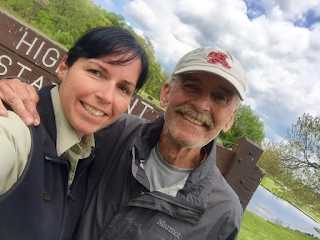 Monday 5/16
Heading back to the trail. I have decided to skip the rest of Pennsylvania and hopefully get away from the rocks. It was sad saying goodbye to Anne.  I may not see her for more than 2 months. Airplane to Newark. Taxi to Newark bus station. Bus to Stroudsburg PA. Taxi to Days Inn. Saved Anne over a thousand miles on the car and about 20 hours of driving.

Tuesday 5/17
It feels good to be back on the trail. Left out of Delaware Water Gap.  Fewer rocks pop up here than in Pennsylvania.  My legs feel good. I only did 7 miles - don't want to push it. I'm tenting at a campsite. It is getting chilly! At least there are bear boxes and a privy.

Wednesday 5/18
I stayed in another campsite. Have to hang food bags in the trees. It is a pain in the butt. Saw my first bear! He strolled into camp as I was putting up my tent. He looked at me I looked at him and he strolled right out. That's a good thing. This is the second campsite where there is supposed to be water and I can't find it. Fortunately I filled up before I got here. Going to be another chilly night but I am warm and toasty in my sleeping bag and tent.

Thursday 5/19
I did not see anyone all day. That is the first time this has happened. At long last there have been some stretches of Trail where I can actually walk at a good pace. Hopefully that is a good sign. I saw several snakes today. Not poisonous, but they were big at least 6 foot long. I tried to take a picture but they move so fast I could not get my phone out in time. Spent the night at Brink shelter. Met another hiker named Alpenglow. He is Canadian and wears a kilt. Very interesting guy. He started in Springer and has already come this far.

Friday 5/20
Trail magic all day. I skipped breakfast to eat at a place called The Appalachian Diner. It is right on the trail where the trail crosses a highway. It's supposed to be really good food. Got there and it was out of business. I was standing in the parking lot looking lost and this guy pulls up in a pickup truck asking if he could help. I explained what had happened and he told me the restaurant had closed after the AT Trail guide was published. His name was Bob Boyle and he was a trail angel shuttle driver. He drove me into town to get my resupply boxes, including a special treat from Joanne Packer - homemade cookies! Bob dropped me off at the Jumboland Diner. A woman saw my t-shirt and asked me what it was all about. I explained what I was doing and she said her dad was a Vietnam vet and her brother was an Iraq vet and they both had PTSD. She took one of my cards and thanked me for what I was doing. When I went to pay my check I was told she had paid for it. I don't even know her name. The waitress filled my water bottles with ice cold water. Then I went outside to unpack my boxes and get it loaded into my pack. Another man pulled up and asked if I needed a ride and he gave me a ride back to the trail about 3 miles. Hiked up to Grand Anderson shelter where I met Jack, a trail angel who gave me a cold soda. He also had bourbon and beer if I had wanted. What a great guy. What a great day!

Saturday 5/21
Another good day. Was eating lunch in a shelter when Nera showed up. I had not seen her since PA it was good to talk to her. It is funny how you meet people then lose contact and then bump into them later. That is a certain kind of Trail Magic. I stayed in a shelter tonight with a bunch of Boy Scouts on a hiking trip. I imagine Eli would like doing things like this. I wonder if his Troop does camping trips?

Sunday 5/22
They say that everything happens for a reason and if I didn't believe it before I am now a firm believer. Woke up in a shelter and as soon as I stood up my back went out. Not too severely but this has happened before and I knew what was coming. I limped into High Point State Park headquarters hoping to find out where the nearest chiropractor and a place to stay were. Rebecca, the park superintendent saw my t-shirt and we started talking. She said they were having a ceremony  honoring veterans at the memorial on top of High Point mountain, would I like to go and afterwards she would give me a ride into Port Jervis NY,  the nearest town. I said yes and we went to the ceremony. When we arrived she introduced me to the man who was in charge and he asked if I would like to speak. There were senators, congressman, councilman and all sorts of other dignitaries speaking and little old me. It was amazing. There were veterans there from as far back as World War II. I talked a little about what I was doing and afterwards a man came up who was a reporter and took some information. Today I am in the local newspaper! NJ Herald article Other than the fact that my back hurt it was a great day!

Monday 5/23
Got my back adjusted by a chiropractor in Port Jervis New York this morning. I am glad I have the letter from Dr. Reed. Hanging out at Days Inn with ice on my back. Hope to be on the trail tomorrow.